An Example of Poor Security Communication in the Google Auth Flow

The issues discussed in this post were responsibly disclosed to Google Security. Google triaged the issues, talked to the involved teams, and declined the opportunity to fix before publication. They gave me written permission to blog about this.

Summary: Google Apps Script is a powerful scripting environment provided by Google that can make authenticated requests against user data inside of Google’s properties. When authorizing a Google Apps Script, users are unfortunately not clearly told that they’re allowing a 3rd party access to their data until it’s too late, making social engineering attacks far too easy. Worse, Google Apps Scripts are on a Google domain, so even savvy users who look for suspicious domains will be fooled. After authorization, the script can do something malicious, such as upload the user’s email, delete data, or access sensitive personal information via a Google API.

Let’s walk through the flow. Here is a simple Google Apps Script that I made. Notice the trust-worthy google.com domain.

A malicious person could make an Apps Script that performs almost any action against a user’s Google data, then share the link in the guise of a helpful tool. Since the URL will be to script.google.com, it looks legitimate and even savvy users will likely be fooled.

I named my app “Google Security Upgrader”, but it could be called “New Gmail”.

Here is an example authorization flow that a victim sees: 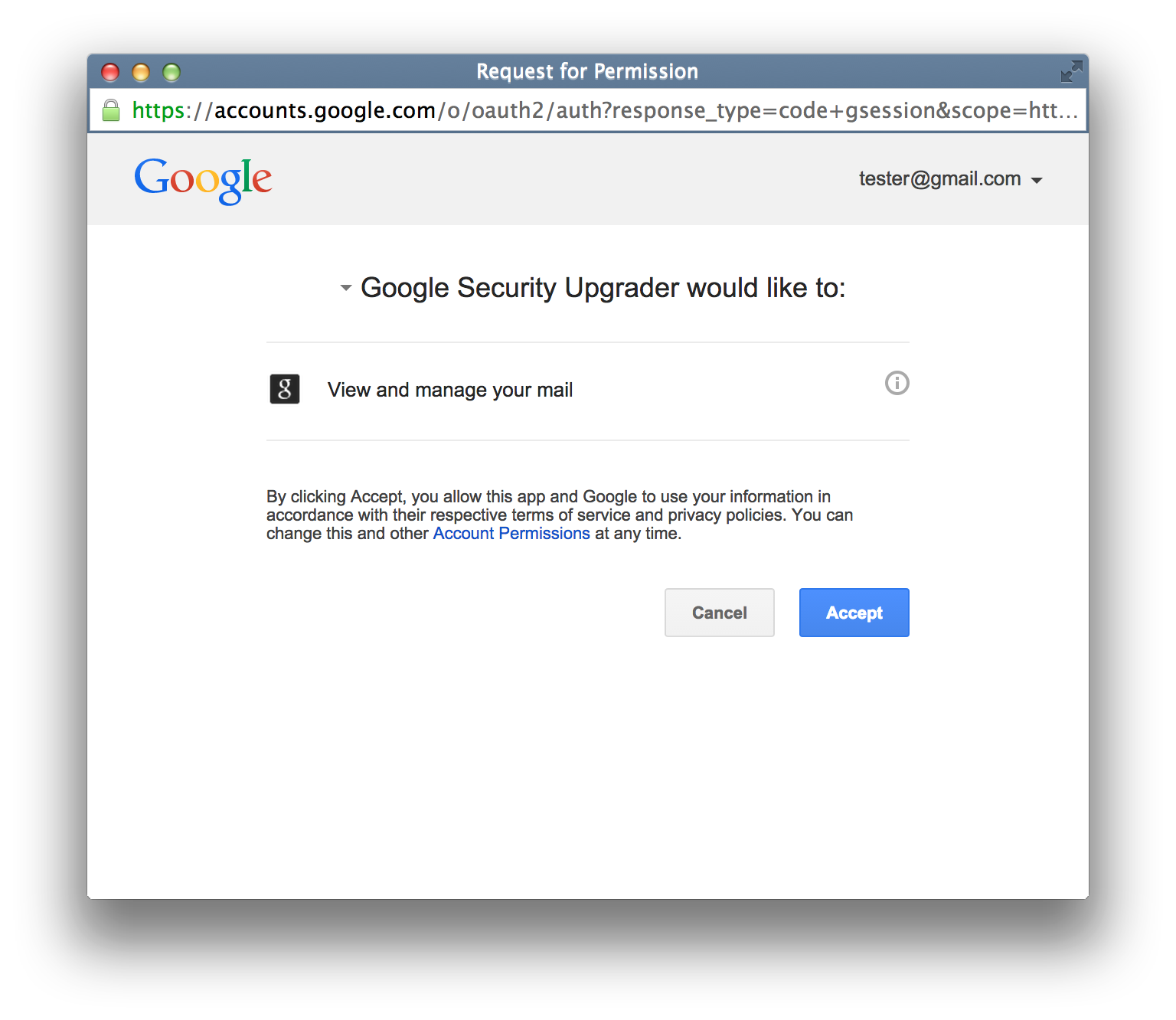 The attacker’s ability to name the app anything they want is very dangerous. I named the app “Google Security Upgrader”. Google in no way makes it clear that this app was created by a 3rd party, and is not affiliated with Google.

The user approves the app, because it seems completely legit:

Once approved, my particular script actually just makes a new Gmail label, but it could have deleted data, emailed a link to the script to everyone in the user’s contact list, manipulated personal information, or stolen data and sent it to a 3rd party.

Effective security communication is really hard, but it’s critical to communicate to a user what actions they’re taking, especially during an authorization flow. At minimum, I feel that Google should add a very prominent warning, both at the top of the script page and in the authorization box.

As it is, I feel it is unreasonable to expect that users would understand the possibility that malicious code could be executed while remaining entirely within the Google domain. Ironically, after authorization, Google sends an email explaining that a 3rd party app has been authorized, but at this point it’s way, way too late! The app has already accessed the user’s data, and has deleted, stolen, or manipulated it.

The test app in this case is called “Google Security Upgrader” and simply contains:

Google chose not to fix this issue before publication: “The team will take this suggestion into consideration, but per our discussion with them, this is currently working as designed and is not a technical vulnerability. Thanks again for the report, and good luck in your future bug hunting!”

Unlike my recent report to Google about a timing attack, I think this particular issue is severe and should be fixed. I hope they do so soon.